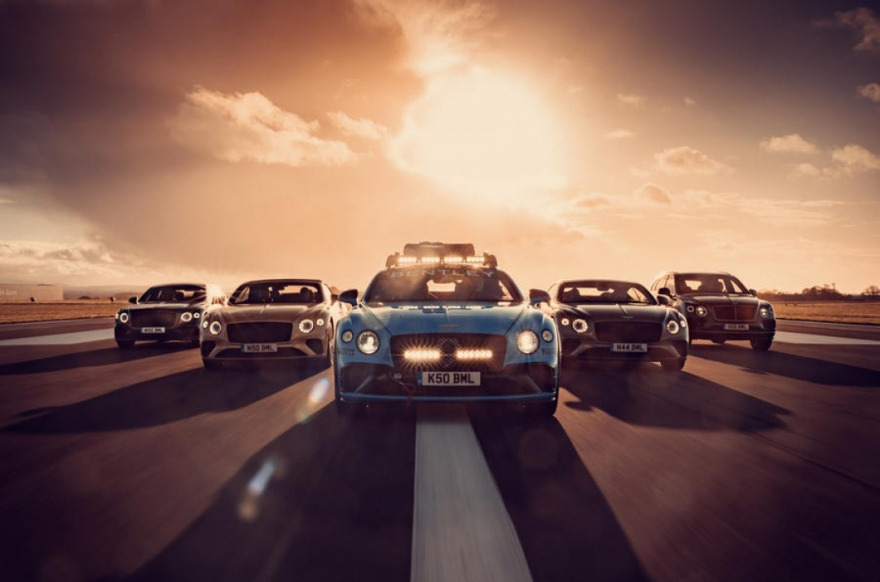 Our starting point would be Leeds Castle in Kent, and we’d go there on the Friday evening – well before the show’s Tuesday official opening – to get to know other members of our party over dinner before heading 750 miles across Europe. There was to be a chateau stopover on Saturday, then a dash over the Alps to a lakeside hotel on Sunday – perfect timing for Geneva’s Monday pre-opening show events.

Years ago, Geneva was a leisurely affair for the scribbler: drive across, return after a couple of days with a full notebook, spend the rest of the week writing your stories for print. Easy. But these days, it’s a cut-throat competition. Video crews are everywhere (from six-person, seen-it-all pros to jostling individuals with iPhones) and the competition to post instant info is desperate. Beating your opposition to a story by 10 minutes is a big win. For traditional ‘inkies’ (like me), the challenge is to avoid being trampled by platoons of entitled influencers spouting nonsense into a black hole. Under such circumstances, it may strike you that taking two carefree days and three luxurious nights getting to the Swiss city was a bit over the top. Perhaps it was. But Bentley likes to do things in style. They sell the sizzle to sell the sausage. They reckon showing these media types the life that goes with Bentley ownership helps them understand the cars, and they’re right.

As you know, the Geneva motor show never happened. The terrifying rise of the coronavirus in China and Italy induced the hapless Swiss organisers to call the show off at three days’ notice. It was a debacle but it had to be done. Back in Blighty, eight expectant hacks had already packed their bags for a Bentley trip. Six had flown in from foreign parts. Even so, a normal car manufacturer would undoubtedly have expressed regret, cited insurmountable obstacles and sent them home. Not Bentley. Its tiny events team, fronted by a bloke called Mike Sayer – whose name, for me, will always appear in lights – took the view that they’d already organised test cars, marshalled chauffeurs, made arrangements. The chosen scribblers were willing and the idea of showing them a Bentley life was still valid. Why not do a journey of London-Geneva length in the (then) virus-free UK, taking in some Bentley-appropriate stops en route and finishing at the company’s Crewe HQ? In the meantime, other willing Bentley hands could recall the Geneva trucks and unload their contents at Crewe by the time our party arrived. We’d meet Bentley’s bosses and see the exhibits, principally design director Stefan Sielaff’s arresting, ultra-low-volume Bacalar concept.

Eight out of eight of us signed up, knowing nothing but trusting our hosts. The Friday-evening dinner (after a tour of Leeds Castle’s splendours, which go back to 1119) was friendly and delicious. The only fragment of info about our route was that one proposed stopover had been Gleneagles – because it started with the ‘G’ of Geneva. But every room there was occupied. The following morning, a plan emerged over breakfast: we’d do an 835-mile circuit of the UK taking us up the eastern side of the country to Edinburgh, then south-west across Scotland and down to Crewe. We’d spend the first, Saturday morning on the A1 and A1(M) before branching onto the A66 through Teesdale and then letting the A69 and A68 deliver us to Edinburgh and a stately hotel called The Balmoral for dinner and a nocturnal whisky tasting.

The next day, we’d briefly retrace our route to the Glenkinchie distillery (Sayer takes an evangelical approach to Scotland’s amber nectar) and then we’d turn south, initially on the A7 before a series of challenging and artfully chosen B-roads to the A74(M) and M6 just above Carlisle. It is here that Bentley’s people really showed their mettle. Feeling we’d been deprived of a proper Bentley blast on unrestricted autobahns, they diverted us to Carlisle airport, where a remarkably obliging airport manager agreed at short notice to shut the 1.8km main runway (with flights due later in that afternoon) so eight hacks could do 160mph in the UK. It was an amazing feat of organisation and goodwill and the cars did it with aplomb. After that, we wafted a few miles further south to a welcoming little hotel in Grasmere called Forest Side. The following day, they pulled another stroke. Instead of spending our non-Geneva Monday morning driving directly to Crewe, we were diverted into Cockermouth and to the magnificent headquarters of Malcolm Wilson’s M-Sport, where Bentley’s highly successful GT3 race cars are built. Our host was Wilson himself. He took us on an hour’s tour, more than enough time to absorb the scale of activity, level of expertise and commitment of the hundreds who work there. Wilson even piled us into a Volkswagen Transporter and took us on a lap of his new handling circuit, about to open for testing.

Before 11am, we were back in our cars, gobbling up the last southward 150 miles to Bentley HQ in Pyms Lane, where (wouldn’t you know it?) lunch was waiting. After that, we spent time with Bentley CEO Adrian Hallmark (who explained the company’s rude health and impressive ambitions) and Sielaff (whose pride in the gleaming Bacalar was obvious). You’ll have read some of this in our ‘remote Geneva’ coverage a few weeks ago… And so to the cars: I was lucky to be paired with a cheerful Top Gear bloke called Stephen Dobie, who turned out to be a calm, safe but pretty quick driver. It’s absolutely vital, this, when your partnership lasts two whole days. There’s nothing quite as bad as accompanying some bozo who wants to show that he could have been Lewis Hamilton if life hadn’t been so unfair. Sayer took the lead in Bentley’s ‘ice car’, a luridly painted GT equipped with competition seats, a roll-cage and a weird-looking roof rack, but otherwise surprisingly standard given that it had just won the famous race at Zell am See, Austria. My first car on leaving Leeds Castle was the newest and longest, a Flying Spur First Edition with a Verdant body and a terrific two-tone interior. With the £6600 Naim audio system and the First Edition stuff, it came out at £168,300, which by the time we’d been driving for half an hour seemed to me more and more a rational price. Two words repeated themselves in my head: quality and capability. Having driven one of these on the press launch in Monaco, I knew it’d set the benchmark for refinement, and it did. Before the W12 engine was revised for the Bentayga, it was impressive but (if you listened carefully) a tiny bit buzzy. This one defines the word smooth. Given the size and wheelbase, you never stop being impressed by the way this Flying Spur turns, and the accuracy with which you can drive it. It turned out to be ideal for our mostly motorway first leg, where the Bentley team miraculously found a superb lunch stop called Middleton Lodge at Scotch Corner, a place I’d hitherto associated with hurried tank fills and greasy packet pasties.

Our afternoon car was the convertible, a W12 with Julip paint (an adventurous sort of matt green) and a Beluga interior. In that, we turned off the motorway, heading through the undulating roads of rural northern England and relearning two lessons: that when body control becomes an issue, the best suspension mode (of four) is always ‘Bentley’; and that the convertible’s rigidity is unimpeachable in all conditions. We drove top down in 3deg C weather all afternoon, raising the hood (at 30mph through a village) only when it started to rain. When I’m in a Bentley convertible, I’m always convinced it’s my choice over the coupé (after the lottery win). The trouble is, when I try a GT coupé, I’m inconveniently convinced that’s the superior choice. Not because there’s any big difference in refinement (with hood erect, the convertible is indistinguishable from a tin-top) but because somehow it seems a slightly more simple, essential car.

I was in the V8 coupé on my own on our second morning because my partner had generously elected to drive with one of the Yanks, who kept getting lost. This was the cheapest car of the quartet, a Conti V8 coupé in Alpine Green with a dark, single-tone interior. Its £151,800 price included a cool £40k worth of options, a handy fact because I’ve wondered for ages what a basic Conti GT would set you back. And be like. Bentley does offer a bewildering array of ‘upgrades’, but I seriously doubt it’d allow the most basic choice of finish, trim or gadget to be less than top quality. Our Monday transport was the Bentayga, hugely quick and capable and worth £182,200. After the others, it drove just like a Bentley, only taller. The elevated driving position is a help on little roads, and its more upright driving position definitely delivers that ‘command’ thing. And the usual Bentley steering authority and ride quality are there in spades. I was still thinking such thoughts as we turned into Pyms Lane and drove up the deliberately maintained rough surface onto the apron of Bentley’s showroom. Major impression of the trip? That I was profoundly sorry to arrive, even after 835 miles, because it was over. That says everything about the long-distance ability of these cars. Other impressions? Of the sheer, bloody-minded thoroughness in the cars’ development. Whatever situation or road condition you encounter, they’ve been adapted to it.

My favourite of the bunch? The 4.0-litre V8 coupé, because I love the styling and it has the more characterful and better-sounding engine. But the truth is these superb cars were all so close and capable that I strongly suspect, had I driven them in a different sequence, I might have reached another conclusion. By Steve Cropley www.autocar.co.uk/car-news/features/continental-plan-b-driving-scotland-bentley-convoy
Less
Journey
9
1
Copied!